‘A picture is worth a thousand words’ is the old saying that describes the power of an image. So many of the stories from ancient times are bound to an image. Few understand that particular aspects of the sacred knowledge of the Waitaha Nation, which I was called to bring into our world, were held in a particular place. The elders would only bring out that lore in that place. We had to be at a certain rock, lake, river, bay, mountain, tree, waterfall or valley to bring out the story that was anchored in the land. Nothing was disconnected; all was one.

So I have returned to the old ways to share stories evoked by an image that is of a place and time.

Raureka and her dogs 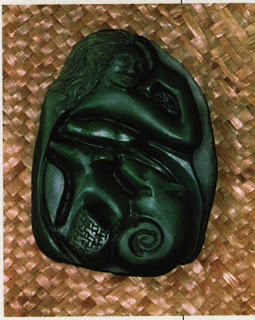 Robyn Barclay
In telling this story I wish to honour one of New Zealand’s great pounamu carvers: Robyn Barclay, who left us far too early. The piece you see above is hers. The original stone was given to me by Hettie, a true Guardian of the Stone. On the occasion of the gifting she said, very firmly, 'This stone is for you alone. Do not give it away, as you have given the others away!'
Well, I didn’t give it away, but I did let it stay with a woman who needed healing. A year later when I placed it in Robyn’s hands I offered no suggestions of what she might carve. A year or two later she announced she couldn’t work the piece.
‘Why not, Robyn? What’s wrong with the stone?’
‘Nothing. It’s an amazing stone, but every time I look at it I see dogs!’
For a moment I was bemused and confused, then I laughed with joy and replied, ‘I know the story of this stone. Know all about those wonderful dogs and I’ll tell you the story of their companion. She’s a brave ancestor.’
So I told Robyn the story of Raureka and thus this beautiful piece was created in the power of her heart, her mind, her spirit and skilled hands. When our paths met again she showed it to me then said… ‘But it’s not finished yet.’
‘Yes, it is!’ I responded. ‘And it’s truly remarkable. However, if you feel you still have work to do on it, I understand, but might I have it for a short time to photograph it for Song of the Old Tides?’
So it journeyed into that book to sit with other images that spoke of the Ancestors of long ago. And soon after, while it was still in my hands, Robyn left to join them, to tell her wonderful, hilarious stories to those who are of the Unseen and walk at our side.

Raureka of the mountain passes

I think it appropriate to share the story as it unfolded within Song of the Stone. Robyn was a trail maker for many. In Stone I share the story of opening the ancient Trail of the Peace Maker, the trail that had been closed for over a hundred years. It was at first light on the fifth day on that journey to lift the tapu, that we take up my narrative.
Jo had something exciting to tell us that morning. She said...
“We had a visit in the night. Everyone else seemed to be asleep. I was wide-awake. Light was still escaping from the firebox so it wasn’t very late. The face of an elder appeared before me, then he moved on to look at each of you.”
Today was so important. I sat aside to think about the trail ahead, to create a quiet space, room for the wairua to move. Jo’s story turned through my mind like a key turning in a lock to open a door. A name found voice. “Raureka.” Then other words emerged, words buried deep in earlier days, words of caution...
“If the face of a woman appears to anyone in the party as you approach the pass you must stop immediately. Heed her warning. She is Raureka, the Keeper of the Trail.”
Raureka was born of the mountain people and those who walked with the stone. That was many centuries ago in the earlier days of the Nation. She was trained in the lore of the trails and called to serve the people on the passes. Her life was dedicated to guiding the stone carriers through the wilderness. She traveled this trail with her dogs, her only companions on some lonely journeys.


Sometimes the elders sent her to the passes to meet a party from              the east to bring them safely to the waters of the western shores. At other times she guided twelve from the villages of Hokitika, Arahura or Pa Roa to the pass. There she gave them into the hands of another who led them safely through the eastern trails.


Storms created the greatest hazards in the mountains. They brought the snows to the heights and released the heavy rains that give birth to the floodtides that made the rivers uncrossable. The trails were only open in the warmer months.
The day came when Raureka was sent into the mountains late in the summer to await a party journeying from the east. She arrived at the given time on the right quarter of the Moon and camped in the pass with her dogs. She looked east each day, sweeping the long valley below with keen eyes, anxious to gather in those she would guide westwards and concerned to be out of the mountains before the snows came.
Dawn followed dawn. No one arrived. Raureka’s supply of smoked eel, so favoured by the mountain people, was finished. Was she now free to return to her home in the west? No! She decided to stay, to be there if the party arrived, to honour the way of the trail.
The snows fell heavily that night. Dawn revealed the ancestors standing tall and strong, wearing their beautiful korowai huka, their cloaks of snow. The mountains were silent.
In the springtime, when the yellow flowers of kowhai marked the trails again, the people found Raureka. She was still waiting for the party to appear from the east. Her bones rested there, testimony to service, and beside them the bones of her companions who stayed by her side.
The spirit of Raureka still travels the trail to guide those who walk in peace. And the bark of her faithful dogs echoes through the valleys in the night. We heard them. They were ever present.
When we formed the circle for the karakia I put Raureka there, saying...
“Should you see the face of a woman in the mist or the clouds, or strongly in your mind as we climb the pass, I want you to tell us.
Don’t hesitate. Trust what you see. Speak out.”

Thank you, Robyn. You spread so much joy, moved with such delightful energy and worked with so much integrity that you changed lives every day. It was no surprise to us that the police in your little town cruised by to note the registration numbers on the cars outside your house. Who else had the openness and compassion to welcome the lost and the lonely youth of the town to sit in the warmth of your hearth? You revelled in the title of the Black Witch, given to you by the locals, a naming that originated in the realm of derision and soon became a title of town pride.
Posted by Barry at 17:39 2 comments: 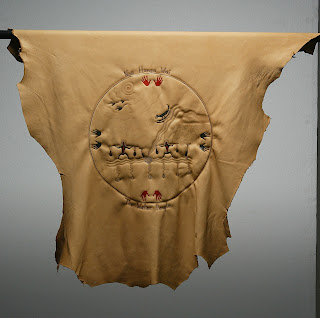 Maaka Tipa
Journey as the waters go.
Learn to flow smoothly through the land.
Accept the joy of the rapids,
relax in the sparkling pools,
languish in the lakes,
laugh in the tumbling waterfalls
and bathe in their rainbows.
Honour the river that flows within each of us.
From Song of the Silence
In this little brush and ink painting I’ve returned to the Elders’ teachings that prepared me to walk Te Huarahi o Rongo-marae-roa, the Trail of the Peace Maker. This sacred trail of the pounamu — the stone of love and healing — had been closed for nearly one hundred and thirty years, because gold miners had spilt blood on it in anger. The tapu they placed there so many years ago had to be lifted before the ancient knowledge they wished to share could go out into the world.
Each day on that nine-day journey we took the pounamu we carried to the streams along the way.
All journeys have ebb and flow, fast and slow and rough and smooth. They call us to attune to the outer world and inner world of learning. Water is life, the wellspring of our returning to values set aside.
We are of water and water is of us. 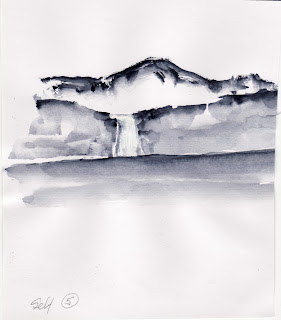 Barry Brailsford
Posted by Barry at 17:46 No comments: 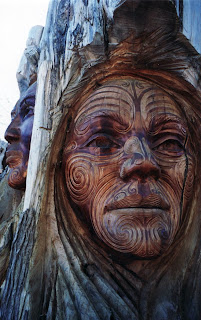 Woody Woodward
This morning, a tree feller came to cut down a tall cedar on the land we tend. It was a sad occasion, but necessary, because some thirty years ago it’s seed had been blown into the centre of our beech forest. Now it was seeding its own kind, creating its own generation, which would smother this last remnant of native beech.
So the howl of a chainsaw was going to impinge on the beauty and silence of the day. I decided to handle this in the old way, in the way of those who tended the forests long ago. Remembering the elders’ teachings that they brought to the felling of a tree, I broke off a small branch and approached it and told the tree, and the forest around it, what was about to happen. Then I gently struck the place of the impending cut several times with the little branch and explained a deeper blow would follow and its life would end. All that it was would still be honoured for it would heat a home in the time of the winter snows and keep a new baby warm. Its leafy branches would be shredded to mulch the family garden and its wonderful scent would fill the air with the memory of what had been.
The chainsaw screeched. Silence. No shudder ran through the forest even when the tree fell. Did what was offered and the karakia help? I can’t say but it was done and I hope done in a good way. Now, in keeping with the old ways, fifteen little trees of the beech kind will be planted to honour the passing of a tall tree.
You may be of the Tree People. We are the sum of all that’s ever been of our line. We are the ancestors. If after a wretched day all you want to do is get into your garden to dig and sow, weed and harvest and find you have gained more energy than you put in, you are of the Tree People. You connect with the spirit of your ancestors when you are sustained and excited by what you do. We carry wonderful abilities passed down through time. Some may also be Stone People or Fire People, Water People or Bird People or of many other ancient lines.
The elder’s once told me the beech trees carry messages. For a long time I’d not understood the depths of what that might mean. However when they encouraged me to write, Wisdom of the Four Winds, to bring the kaitiaki or spirit guardians back into our lives, I saw a little deeper. If wisdom is simply growing into greater awareness, then everything around us, the mountains and forests, the rivers and oceans, the birds and fish, the thunder and lightning, the Sun and the Moon have things to tell us.
Posted by Barry at 17:49 3 comments:

CURRENT MOON
about the moon